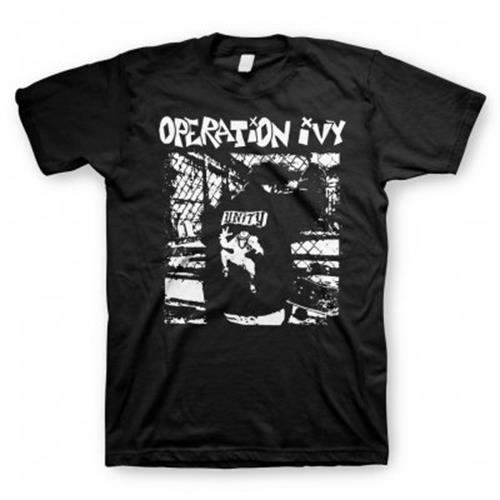 One of the first bands to fuse revivalist ska with the energy and aggression of post-hardcore punk rock (after the Mighty Mighty Bosstones), Operation Ivy were also one of the few ska-punk bands to earn critical acclaim. Part of the reason was that they were one of the genre's innovators, possessed of a freshness that many of their imitators lacked, but their lyrics were often more intelligent and substantive as well. Thanks to their early breakup (the group was only together for two years), Operation Ivy became an enduring, even legendary influence in the neo-punk underground, especially after half of the band went on to hit it big in a new group, Rancid.

Operation Ivy were formed in Berkeley, CA, in May 1987 out of the ashes of several local bands. Lead singer Jesse Michaels, guitarist Lint (born Tim Armstrong), bassist Matt McCall (born Matt Freeman, renamed after the hero of the TV series The Equalizer), and drummer Dave Mello began playing extensively at the famed Gilman Street club, a center of the Bay Area's burgeoning punk revival scene. (Initially, they had no horn section, though sax player Paul Bae would later join them on selected recordings.) They quickly signed with the local punk label Lookout, and appeared on two compilations by the end of the year: the label sampler The Thing That Ate Floyd, and the Maximum Rock'n'Roll magazine sampler Turn It Around. In 1988, they released an EP titled Hectic and toured the country, playing small-scale punk venues.

With a budding reputation as an excellent live band, EMI offered Operation Ivy a major-label deal. Unsure of how to react to the prospect of success -- both because of their independent politics and local-mindedness -- the band chose to break up rather than compromise their intentions, playing their last show in May 1989. Their debut full-length album, Energy, was released on Lookout several months later, and became a touchstone of the third wave ska revival largely through word of mouth. Michaels went on to sing with Big Rig before leaving music; varying accounts hold that he became either a Buddhist monk or a Central American missionary, and may have returned to the U.S. to work for Lookout. Mello joined Schlong and then reunited briefly with Armstrong and Freeman in Downfall, which released an album on Lookout in 1995. Armstrong and Freeman, reverting to their real names, formed Rancid in 1991; their Clash-inspired punk and ska helped make them one of the most popular bands of the '90s punk revival, after Green Day and the Offspring.