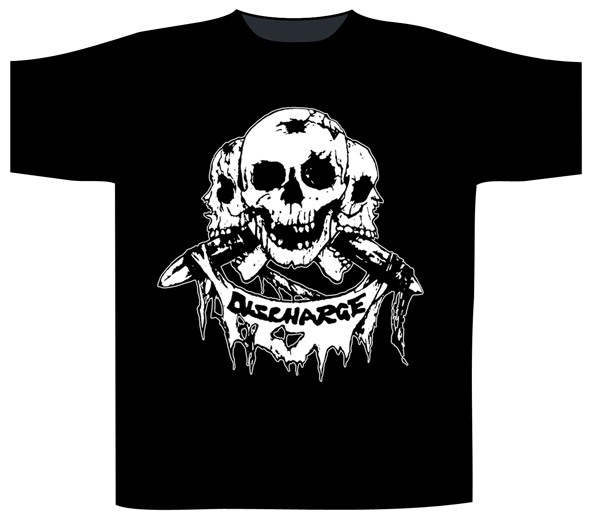 Discharge is a British Hardcore punk band formed in 1977 by Terry "Tezz" Roberts and Roy "Rainy" Wainwright. They are often considered among one of the very first bands to play street punk, and mixing punk with metal. While the band had substantial lineup changes over its history, the core members over the early 1980s, when the band produced its key recordings, were Kelvin "Cal" Morris (vocals), Tony "Bones" Roberts (guitar), Roy Wainwright (bass), and Terry Roberts (drums).

The band's music is characterized by a heavy, distorted, and grinding guitar-driven sound and rawly shouted vocals, with lyrics on anarchist and pacifist themes. The band's first album in 1982, Hear Nothing See Nothing Say Nothing, went to number two on the UK Indie charts and number 40 in the UK Album Chart. In the early 1980s, the group had a number of singles and EPs place in the top 10 of the UK indie charts, including the 1981 EP Why(#1) and the 1982 single State Violence State Control.

After 1982, the addition of guitarist Peter "Pooch" Purtill brought significant thrash metal crossover elements to the band. In the 1990s, the band released several metal-influenced albums, which alienated some of the original fan base. In the early 2000s, the original line up was reunited and they released a self-titled album using the 1980s musical style.

Discharge formed in 1977 in Stoke-on-Trent by Ivan Rivera (vocals) and Roy "Rainy" Wainwright (guitar).[1] They soon recruited Terry's younger brother Tony "Bones" Roberts on lead guitar, Nigel Bamford on bass and Tony "Akko" Axon on drums.[1] This line-up recorded a demo in 1977. Atkinson left, followed by Bamford, and the band recruited Kelvin "Cal" Morris (previously one of their roadies) as vocalist, with Tezz moving to drums and Rainy moving to bass.[1] The musical style of the band was initially influenced by 1977-era punk bands such as the Sex Pistols, The Damned and The Clash.

When Cal joined the band, the group abandoned their previous Sex Pistols-style material, and developed a new set of songs for the lyrics written by Cal. With this new lineup, the band's sound changed. "Bones" played guitar with a heavy, distorted, and grinding sound and Cal shouted or screamed vocals in an anti-melodic fashion. The tempo of the band's songs also steadily increased over the next year or so.[1]. The stylistic transition made by the band was part of a broader trend in the early 1980s in the UK, which is known as "UK 82" or Second Generation UK Hardcore. Bands such as Discharge, Chaos UK, Amebix, and Charged GBH took the existing 1977-era punk sound and melded it with the incessant, heavy drumbeats and "wall of sound" distortion guitar sound of New Wave of British Heavy Metal (NWOBHM) bands such as Motörhead. The new, harder-edged style also tended to use much darker, more nihilistic, and more violent lyrics, and vocals were often shouted rather than sung.

The first gig with this new line-up and new sound was at Northwood Parish Hall, and among the audience was local record shop owner Mike Stone. He had just started the Clay punk record label, and had attended the gig at the band's request.[1] Cal's lyrics focused on anarchist and pacifist themes emphasizing the grisly effects of nuclear warfare and the social ills caused by capitalism. Cal's approach to lyric-writing also added to the raw power of the band's sound. Cal's songs often stripped down the lyrics to a guttural, repeated message, to forcefully express a song's theme. Perhaps the most extreme example of this approach is the song "Free Speech for the Dumb," which consists solely of the words from the song's title.

The band also expressed its political and social themes in its albums' artwork, which depicted the horrors of war using an iconic black-and-white photography style.

In 1980, Discharge signed with Clay Records, and recorded their first single "Realities of War" in February 1980, which made the UK Indie Chart when it was released in April, after being played on John Peel's show, peaking at number 5 and spending 44 weeks in the chart.[1] The band also performed their first shows outside of Stoke-on-Trent in 1980, playing in Leicester, Preston and Glasgow. After two further EP releases in that same year, founding member Terry Roberts (drums) departed, later joining UK Subs, and he was replaced by Dave 'Bambi' Ellesmere (formerly of The Insane) before the Why EP was recorded.[1] Ellesmere did not stay long, and the band replaced him with Gary Maloney of The Varukers on drums. Why gave the band their first UK indie number one[1].

A reviewer from Punknews.org calls the music from this period "ugly and jagged without the artistic convolution of their no-wave contemporaries overseas", composed of "catchy, repetitive, stomping chords[,]...drumming that seems to emphasize creating a hellacious racket rather than keep a steady beat" and "very serious and socially conscious" song lyrics. The reviewer notes that "Instead of creating a melody, vocalist Cal’s grunting shout...blends in with the rhythm", in effect becoming "a fourth [rhythm] instrument". [2] The reviewer argues that the early 1980 EP "Why?" "...revolutionized everything...[paving the] way for the atonal shredding of hardcore punk, thrash, death metal, and grind, but also the dead-serious political ideals and brutal backing of crust hardcore." [2] Ian Glasper described the EP as "one of the most potent anti-war records ever made".[3]

Discharge recorded their first album, 1982's Hear Nothing, See Nothing, Say Nothing, which was the number one punk album of all time in a poll by Terrorizer magazine.[1] The album reached number two on the indie album chart and number 40 in the UK Album Chart.[1] The group played regularly throughout the UK, often appearing with bands such as GBH and The Exploited, and the success of the debut album also saw them touring Canada, the United States, Italy, Yugoslavia, Holland, Finland, and Sweden.[1]

Tom G. Warrior of Celtic Frost credited Discharge as "a revolution, much like Venom", saying that "When I heard the first two Discharge records, I was blown away. I was just starting to play an instrument and I had no idea you could go so far. And to me, they were unlike other punk bands--they sounded more like metal."[4]

Guitarist Tony "Bones" Roberts departed after 1982's "State Violence State Control"/"Dooms'day" single, described in local punk fanzine Love and Molotov Cocktails as "...just about the most perfect realisation of a combination of the musical power of Motorhead and the lyrical mastery of Dead Kennedys at their best. Discharge are out there on their own, at the top of their game and it's hard to see how they can improve on this." Roberts later joined his brother Terry in Broken Bones, and he was replaced by Peter "Pooch" Purtill who brought significant metal influences. The "Warning..." EP shows drastic stylistic differences, with Cal changing his angry shouts to a mix of regular singing and football chants. As well, the band used significantly slower tempos and their D-beat punk style was replaced with metal-oriented beats. With the release of Ignorance, Purtill and Maloney left the band to form the punk/metal crossover band HellsBelles. The lineup changed once more in 1986 for Grave New World, a mainstream metal album with a glam sound from Cal's high-pitched singing style. Although the album reached the indie top 10 (before exiting the chart as swiftly as it had entered), the change from punk band to a typical hard rock band prompted a negative reaction from fans, and the group disbanded in 1987.

Morris formed a new version of the band in 1991 following the reelase of the Live at City Garden, New York City album by Clay, with Andy Green on guitar, Anthony Morgan on bass, and Garry Maloney on drums.[1] In 1991 they released "Massacre Divine", which retained the metal sound, though with a noticeably harder edge than on "Grave New World". Cal changed his vocal style, this time to rougher growling, similar to Brian Johnson of AC/DC. They toured widely in support, including their only visit to Japan, but the tour was negatively received. In 1993 they released "Shootin' Up The World", which continued Cal's new vocal style, but the songs were significantly heavier than on Massacre Divine. The album retains the metal direction, although experiments with strange lyrics and song structures, coming close to thrash metal at times. The album received no publicity, and the band did not tour in support of it, resulting in the group's disbandment once more.

In 2001, the original line up reunited after meeting at a party held by original bassist Bamford, and in 2002 they released their self-titled album Discharge, a return to their early 1980s style of politically infuriated and aggressive playing.[1] As well, they brought back their intense D-beat drumming style, although combined with the remaining metal influence, it gave the album a speed metal influence with its thrashy riffs. Cal would not commit to touring to promote the album and left the band, to be replaced by "Rat" of The Varukers. The single "The Beginning Of The End" was released in 2006, finally casting off all metal influences to a return to true hardcore D-beat punk. The band is currently recording a new album with Rat, slated for release in 2008. A book is also currently being written about Discharge, although as Cal's whereabouts are unknown, and his input is essential on documenting the history of Discharge, it is indefinitely on hold.